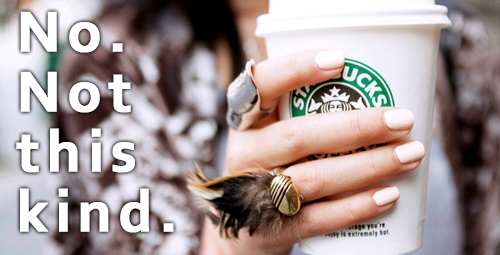 Recently, I found myself in a block of flats at one of the ends of Bucharest drinking coffee in front of an old lady. It’s only been parties and trouble so far and we were now putting on our *mystical*, though, with my solid background in philosophy, I came in as a skeptical soul. I thought, ‘Seriously, I’ve crossed paths with hundreds of espressos – what makes this one more magical than the ones that nurtured me through exam period?’ Whatever the catch, maybe t’was high time to get in touch with the Anghel spirituality and possibly find out why the universe keeps screwing me over. Leaning over the table, watching closely as the woman turned over my cup and began to read, I felt my inner voice coming alive to ruin the moment for me. Here is the transcript with my tacit reactions on the right:

‘You will be married, twice.’ – Hold on. Twice? What about my other three potential husbands? So far, I had a complete set of British banker, Russian oligarch, Serbian truck driver, Mexican drug lord and gay husband. How could I ever choose?

‘You will have children.’ – Didn’t mention if I actually have to look after them. I am now afraid of the unknown.

‘You had a cheapskate partner.’ – Damn right I did. The guy bought me a sexy toy, allegedly gave it to me as a gift, and then asked me to pay him back for it. Yes, I have been to some dark places in my love life.

‘Chubby woman in your family loves you.’ – My mom lost weight, so that leaves Grandma Anghel. I’m down with that. All her conspiracies ultimately end in love.

‘Somebody whose name begins with C, V, M, F, P / with glasses / brown eyes / curly hair longs for you.’ – I know a lot of people. Unless she can also predict a Facebook algorithm to single them out, I’m not even going to bother.

‘You suffered so much, you almost died.’ – Yes, that would be my year in computer science.

‘You spend like crazy, you love luxury, you’re finicky, you’re a loudmouth and your sleep is sacred.’ – Fact.

‘You’re in for some money.’ – I wouldn’t have it any other way for Christmas.

‘You have a lot of success with men.’ – Quantity over quality. Like I told the guy at Tesco who wanted me to share my ice cream with him: ‘This is becoming a liability. I am now on a mission to become fat and ugly and hence, I am not sharing my ice cream with anyone. Now scan that damn thing and give it to me.’

‘You will receive a unexpected inheritance.’ – Let me just say that I always knew I had a kingdom somewhere. They say that you should ‘let the sea come to you’ – well, here I am. Waiting.